After a busy couple of months, I have finally have time to relax and write again. The Boyo is back in school, we are mostly settled into our new apartment, and the last of the Etsy orders have been sent out.

We have been enjoying our first Fall in Washington. It’s been lovely to watch the leaves turn color, the days gradually get shorter, and the rain and clouds move in. We visited a local pumpkin patch and stocked up on pumpkins earlier in the month, and last weekend we went for a ride on the Kitsap Live Steamers Ghost Train – which was really cute and a lot of fun. Today we plan on visiting our friends in Gig Harbor to go trick or treating. The Boyo is so excited. 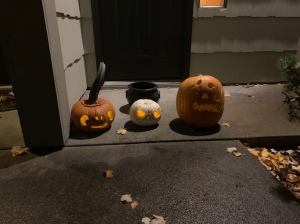 I’m thrilled that WIPpet Wednesday falls on Halloween this year. I have the perfect snippet to share for it, and I’ve been counting down all month long for this!

Since today is the 31st, here is four paragraphs from Elusion. This takes place significantly after the last snippet that I shared way back here. It features Mattie and her friends, who have gone on a picnic that’s gone horribly wrong. While out in the forest, they’ve stumbled across something horrifying. As always this is a rough draft, but it is pretty gruesome, so those faint of heart should look away.

The body of a man had been strung up on the tree. Moldy ropes pinned his arms tightly against the branches on either side of the trunk, and his head lolled to one side – reminding Mattie faintly of the crucifix in the Village chapel. But rather than being an icon of a holy man who had supposedly given up his life to save their souls, this was a vile mockery of that sacrifice.

His arms were covered in slashes and his hands were missing fingers. Blood oozed down his face and through the thick hair of his beard to dribble on what little remained of his shirt. It had been shredded until it was barely more than scraps, and the pale skin underneath was just as tattered. In fact, his entrails hung out through a long gash in his stomach. They were covered in a layer of flies that scattered as she drew closer.

“Mattie!” Liam called out a warning over Sidony’s sobs.

She ignored him, her attention focused on a slip of weathered parchment peeking out from between the poor soul’s lips. She reached up and plucked it from his mouth, jumping back to avoid the black sludge that trickled out over his tongue now that the blockage had been removed. It fell to the ground with thick plops, splattering over the leaves and twigs.