…thankfully it’s not for an important date!

(That was far funnier in my head… oh well…)

Anywho, I’m going to keep this week’s update short again. I’m sorry to do this two weeks in a row, but my toddler has been pulling this ‘I don’t need a nap’ bit this week – even though it’s clear that, no, he really does need one. Oh the joys of two year olds. I’m a bit worn out as a result from all the running around (tag is his favorite game to play). 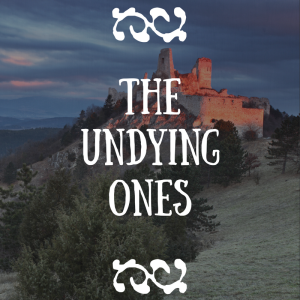 Since today’s date is the fifth, I’ll be sharing ten paragraphs from The Undying Ones. (4+5=9 plus an extra one since some of the paragraphs are short) This week’s snippet immediately follows the last one, and, as always, is nano rough.

The Stranger stepped out of the cell and led them deeper into the dungeon, moving effortlessly through the darkness without any light. He stopped before a rack of weapons hanging on the far wall. The metal blades of the axes and flails were rusty, and the wooden poles were black with mold, but a sword nearby glinted in the torchlight. It appeared that the stranger spent all his time caring for it and it alone. There were other instruments hanging on the wall – smaller knives and hooks covered in gummy grime that had nothing to do with the conditions around them – but Mattie looked away rather than study them for too long.

The man felt along the edge of the rack, his long pale fingers searching for something. He stopped and pressed in on what appeared to be a crack in the wood, and a click echoed through the dungeon. The rack slid to one side to reveal another imposing door criss-crossed with iron strips.

Even though this door appeared to be in just as good shape as the door at the top of the stairs, it was far heavier. It took both Talesin, Rordan, and the strange man to pull it open while Mattie stood back and held the torches. Once it was ajar, she soon spotted the reason why – the opposite side of the door was covered in a thick layer of iron and metal spikes.

The roar of the waterfall was almost deafening now, and fresh water poured through the entryway and pooled around their feet. If Mattie thought the water in the dungeon was already cold, this wave turned her legs into ice. Her feet felt like lead, heavy and cumbersome, as Rordan and Talesin ushered her through to the other side.

The stranger shut the door behind them as soon as they passed the threshold, and she could hear the grinding of metal against stone as the locks slid into place. She cried out, “He’s locking us in!”

“No.” Talesin corrected her as he stepped past her. “He’s locking us out. Look!” He had to shout in order to be heard over the roar echoing around them. He held up his torch so she could see where they stood, and her mouth fell open.

In front of them a wall of water thundered over the cliffs above to crash against the rocks below their feet. Mattie stuck her hand out, her fingers cutting through the cascade to scatter droplets through the air.

Beyond that was the open night sky, trees that were vibrant in the moonlight, and fresh cool air that didn’t smell of rot, or dust, or death.

They were outside the castle.

2 thoughts on “A Little Late…”